New Zealand received a gift from president Roosevelt in 1909, a herd of 20 Rocky Mountain Elk captured from Yellowstone National Park. The Elk were released in Fiordland Park, 1 million acres of wilderness in the South West corner of New Zealand. The spectacular mountains rise from the many fiords covered in thick native jungle like bush up to open mountain tops. An impressive 365 inches of rainfall per year is a harsh environment but the Elk thrived and with abundant year round feed and no predation, the animals grew to significant proportions some trophies exceeding the size of their forbearers.

Fast forward to 2015 and the Elk populations have gone through boom and bust with over population followed by culling, area crossover with red deer causing significant hybridisation.

On our Estate we have a small number of Elk and take some very good bulls. With the Elk and Red deer in the same range we do get a few hybrid animals and this year we spotted something very impressive in the velvet that would make an interesting season. As the velvet stages progressed we got more glimpses of this animal and were blown away by this big non typical. We nick named him the Spyder bull as he looked very similar to the record bull taken in Utah with extra points, drop tines and heaps of mass. This animal appears to be a cross between Elk and Red Stag; he was significantly bigger than any normal Stag and had a large white rump like an Elk with good whale tales on his rack. But he was more Red than a pure breed Elk and had a lot more points and non typical characteristics than any normal Elk. Judging through the spotting scope he appeared to have 6 drop tines off his beam!!

I got some good footage of him once he had stripped out of the velvet and was very excited as he was one of the bigger animals I have encountered, upon reviewing the footage we estimated his SCI score at over 500”. Safari Club International does not have a category for hybrid animals in the record book but he would be a hell of a trophy for someone none the less.

After disappearing for some time guide Chris heard a bull bugling back up in the basin. Locating the bugle and getting in close he was able to confirm it was the spyder bull. He had a herd of cows with him and was still intact with all his points. We didn’t have any hunters in camp that were looking for a bull but I headed up there the next evening and got some footage.

Well after the rut in July we had a group of hunters from New Mexico and Texas come in looking to take some big Stags, on the way from the airport back to the ranch house I told them we had been seeing a huge non typical hybrid bull throughout the season and we thought he would score in excess of 500”, this got the guys interest and we decided to try and get a good look at him during the hunt. We encountered the Bull a couple times during the hunt and he was looking weak, it was late in the season and the breeding season had taken it out of him, he must be an old animal. He was sticking to the timber as the weather was quite cold and windy. On the last day of the hunt we spotted the spyder bull bedded down in sunny little bowl out of the wind, it was mid-morning and he was half asleep in the sun. This was our chance. We dropped down into the timber, got within range and found a gap in the trees where we could see across to him. Hunter Chris got set up on the sticks and lined him up. Taking care to avoid hitting his drop tines he waited for his head to move into position and he held on his neck and squeezed the trigger. The Bull didn't go anywhere; he was dropped on the spot. What a great result, this old bull would not have made it through the end of the winter and was an impressive trophy for Chris to take home with him, something very unique. As we approached the Spyder Bull there was reverse ground shrinkage.. he was an absolute monster!! Unbelievable mass and huge tines. What a hunt, we were in awe of the animal. It had been an interesting season looking for this monster bull and we were pleased to finally get him on the ground. 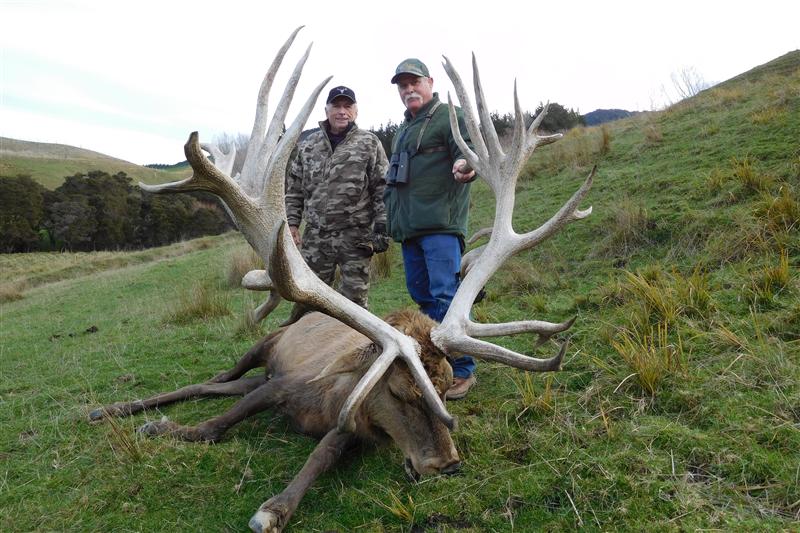 Check out the video footage