Fallow were liberated in the North Island in 1860 from England and Tasmania. Fallow deer are the second most wide spread deer in New Zealand, after red deer. The herd on our property are of Hungarian blood lines with some Danish influence consistently producing big attractive trophies from 200" to 240" SCI with our management system. In 2010 we introduced some new deer with top blood lines to the heard which are now producing bucks scoring 250-290 SCI.

Fallow deer make attractive trophies with their striking palmated antlers, often compared with those of a moose, and various different colour phases ranging from black to ginger with white spots. Trophies are up to 30" long with large palms and many points, often 12 to 24 points and sometimes more.

Trophy bucks can be hunted February through September with the rut, when bucks give a croaking call being in March/April.

Note: Fallow can be taken as an in field addition on a Red Stag hunt. We also offer a 4 species package including fallow buck. 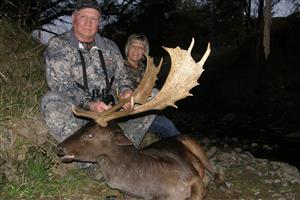 Representative up to 200 SCI