Six Sika deer were gifted to the New Zealand Government by the Duke of Bedford in 1904. Three males (stags) and three females (hinds) from Woburn Abbey where shipped in 5 crates on a 70 day voyage fed on clover hay and carrots. Our Sika deer are of mixed origin with 5 of these animals being of the Manchurian race and 1 hind of the Japanese race. These sika were liberated in the central north island in 1905 and have thrived in the Kawaka and Kaimanawa Ranges scrub and tussock habitat. Today New Zealand offers some of the best trophy Sika deer hunting in the world.

You can only hunt Sika in the North Island of New Zealand, there are no Sika in the South Island. Trophies are typically 4x4 with 24"-32" antler length. They are very territorial and alert making them an exciting animal to hunt. Sika are one of the most vocal deer and can often be called in from a long distance during the rut from mid-April through late May. Sika can be hunted from the end of February through August and can be added to any North Island Hunt. 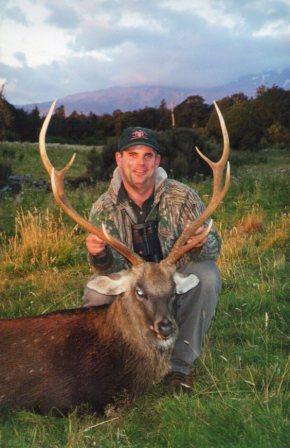